Report on the Institute for Biblical Languages and Translation, 2016

The Institute exists in order in enhance the training of Christians in the biblical languages and to speed up the worldwide program of Bible translation. The strategies embraced include:

The year 2016 has been a year of preparation and laying the foundations for several projects that will allow the acceleration of access to Scripture for the whole world.

A three-week workshop for Hebrew teachers and professors was run at Serampore College. It was jointly sponsored by the network of Serampore schools and IBLT/4.2.20. Three facilitators were provided by IBLT: Dr. Randall Buth, Dr. Jason Driesbach, and Mr. Benjamin Kantor (CPhil). All three have extensive experience in teaching biblical Hebrew in a classroom through the use of biblical Hebrew. There were 16 participants composed of Hebrew teachers from throughout India. The teachers’ backgrounds varied greatly in the number of years that they had been teaching although there was a common denominator that none of the teachers had used Hebrew as a medium of communication in the classroom. There was both surprise and enthusiasm among the participants as they discovered what the language was like when used as a language. 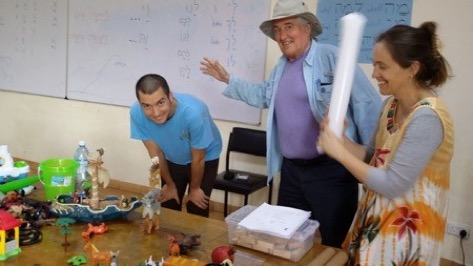 Impact: The Workshop raised an awareness of the desirability for teachers to learn Hebrew to a level where they would be able to think in the language and teach in the language. It is the nature of a three-week language course that a participant, even a Hebrew teacher, can ‘taste’ and experience how the training could be used but three-weeks is an insufficient time to infuse the language and to enable the participants to replicate what they saw and experienced as fluent language users. Because of this, several of the participants have personally communicated with IBLT about attending the 8-month School of Biblical Hebrew program in Israel.

The School of Biblical Hebrew (SBH) In Israel 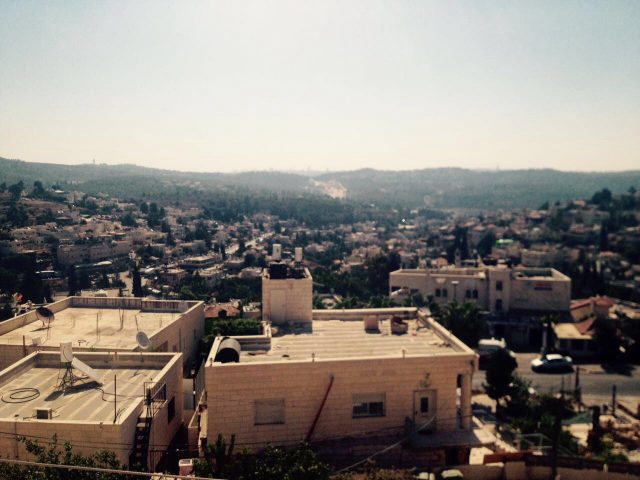 Finding facilities for the 2017 SBH program in Israel was a major accomplishment. IBLT signed an MOU with the Jerusalem Hills Inn, Abu Ghosh, in August 2016. This will provide live-in facilities for students in the eight-month program. Anticipated needs for 2017 will be 16-25 beds. IBLT will use one of the rooms as an office space. There is a main kitchen and large dining area that will be able to accommodate joint meals. Classroom space will be made for up to two simultaneous classes.

In August IBLT signed an MOU with the University of the Holy Land. IBLT will run the SBH under the auspices of UHL. This will mutually enhance both institutions, IBLT students will receive credit through UHL and legal covering within Israel for visas and UHL will expand their language offerings through the course of IBLT.

Modules for the Summer 2017

The first module of SBH will be an Oral Refreshment of Biblical Hebrew, followed by a special Intermediate Biblical Hebrew taught in biblical Hebrew. These first two modules will be taught by teachers of the Biblical Language Center and represents a further broadening of the partnership and of IBLT in the training of biblical languages.

ETEN (Every Tribe Every Nation)

Consultation on Hebrew Training for the Old Testament Task

On August 30th Dr. David Swarr, Dr. Randall Buth and Mr. Ricki G. represented 4.2.20 and IBLT at a special consultation in Dallas, Texas to discuss the feasibility and desirability of a training program (SBH) that could improve Hebrew training for Old Testament translation personnel and that could speed up the translator task. The new program was positively received and has led to further meetings and potential students in the pipeline for the SBH program in 2017 and beyond.

From 5 December 2016 to 3 January 2017 an intensive course in Biblical Hebrew was jointly run by IBLT and Pan Africa Christian (PAC) University, Nairobi. PAC has had a translation training track in the past. Dr. Margaret Muthwii, a former Bible Society Translation Consultant, is the Vice-Chancellor and Dr. Richard Bariu, a Bible translator for the Meru NewTestament, is the Chairman for Biblical Studies and Theology Department. 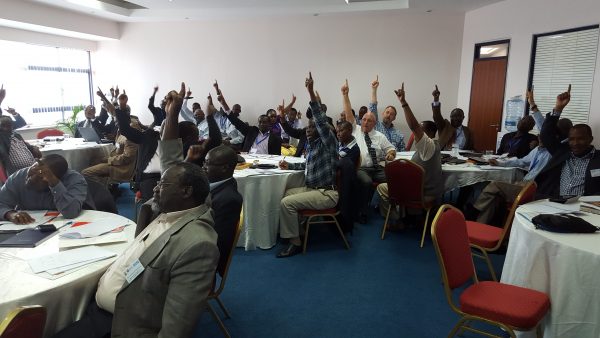 Twenty-five persons attended the December course, 6 of whom were from Bible translation projects in East Africa, representing The Word for the World, SIL, Bible Translation and Literacy-East Africa, and the Bible Society of Uganda. The course introduced the biblical language as a living language in the classroom. While students received 6 credits from PAC, the course also serves as a fulfilling a necessary background for those interested in pursuing Hebrew studies in Jerusalem at the 8-month SBH. The instructors in Nairobi were Dr. Randall Buth, Mrs. Rachel Schultz, and Mr. Benjamin Kantor. The classroom was run 90% in Hebrew in order to facilitate learning and internalization of the language. This is in accord with the recommendations of the American Council on the Teaching of Foreign Languages.

Looking Ahead in Prayer for 2017

We covet your partnership in prayer this year, for these 3 areas in particular: a Ghana Consultation this January; the first running of the School of Biblical Hebrew in Jerusalem; and continued partnering with Israeli believers.

Our desire and mission is to equip those working in the field of translation, so that Old Testament translation can begin in every language around the world by the year 2033.